Down The Road with the Original Buffalo Dale 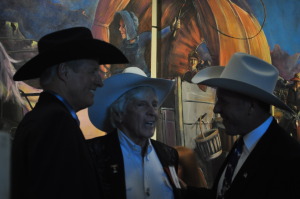 Welcome back.   The town was Oklahoma City and Saturday night at the   National Cowboy & Western Heritage Museum’s big Western Heritage Awards event the stars were out. Lynn Anderson, Rex Linn, Red Steagall and the list could go on as common folks mixed with the famous all gathering together celebrating our western heritage.

Fess Parker’s daughter Ashley was there visiting about her childhood as the daughter of America’s number one hero in the 1950s. Down another hallway Ernest Bourgnine was reminiscing about his long career in the film business with another group.

T.V. and movie star Bruce Boxleitner was there to accept his award and Burns Hargis, President of OSU, Larry Nichols, CEO of Devon Energy, Garth Brook’s buddy Ty England were in attendance, along with dozens of others all decked out to support this wonderful museum.

One of the most touching moments of the evening came when Temple Grandin was inducted into the Hall of Great Westerners. For those of you who haven’t heard of her, Grandin is a woman who has overcome autism to become a highly respected advocate for animal welfare with a doctorate in Animal Science as well as an author and film producer. She received a standing ovation as she walked onto the stage.

Chuck Schroeder, the President of the museum, tells me that plans are already underway for next year’s event and my friends if you’re a fan of the old west it’s a party you don’t want to miss.

Sadly, this week I also need to note the passing of another historical figure with ties to Bartlesville.  Her name was Virginia Lee Phillips and her husband was Chope Phillips, the son of Waite Phillips whom I’ve written about frequently over the years.

Born on October 24, 1922, she grew up with a love of reading and the arts which was unusual for a woman in her time She met Chope in 1943 and they were married in 1947. Waite Phillips recognized Virginia’s talent and intelligence and schooled her in financial management and investments. With his encouragement she took a leading role in the management of several of the family foundations. Virginia and Chope both loved ranching and owned several big spreads together before they retired in 1993 and moved to Amarillo to be close to their children and grandchildren.

Chope and Virginia both attended last year’s The Good, The Bad and The Barbeque, the big Elder Care event that is coming up on May 12th and she impressed me with her gentle thoughtful spirit. She told me that although she had been many places in the world, she missed coming to Bartlesville. She thought Bartlesville was a special place and that Mullendore embodied the spirit and history of the area. Virginia Lee Phillips, 89 years young, we’ll miss you.

Till next week I’ll see ya down the road…..

Down The Road
April 28, 2012The Original Buffalo DalePermalink Leave a comment